The News chronologically lists the current events as short news. 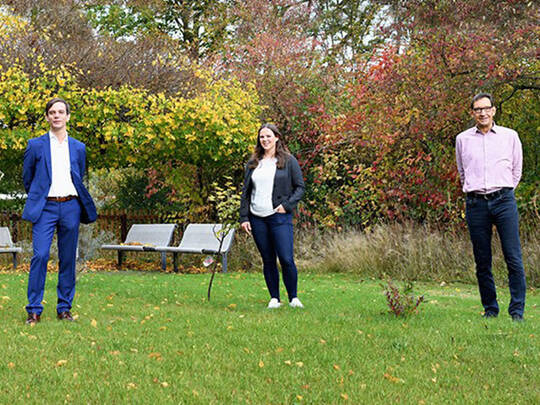 On January 1, 2021, DAHLEM received the ÖKOPROFIT® Company 2021 award. Environment Minister Ursula Heinen-Esser, Mayor Kufen of Essen and around 50 participants met in Zoom as the ÖKOPROFIT® awards were presented virtually for the first time in all of Germany. As a participant in the project, DAHLEM has been implementing numerous in-house measures since 2018 to protect the environment while cutting costs: Reducing electricity and water consumption, introducing e-mobility with cars and bicycles, and much more. The ÖKOPROFIT® Essen-Ruhrgebiet project (Ecological Project for Integrated Environmental Technology) was launched in 2002 by the City of Essen to help companies and institutions establish a feasible environmental management system. "For us, the measures implemented achieved a great record of success. It's good to realize that you can implement many measures for the environment with little effort and at the same time increase the acceptance of environmental protection," says Dipl.-Ing. Markus Küppers enthusiastically. 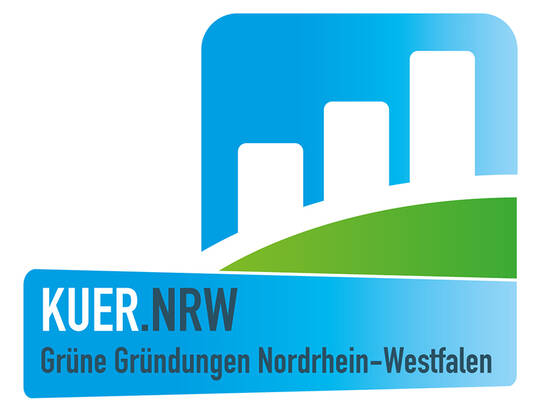 Since May 2021, DAHLEM has started supporting KUER.NRW as a specialist. KUER.NRW is a funding programme implemented by pro Ruhrgebiet e.V. and Business Angels Netzwerk Deutschland (BAND) on behalf of the Ministry of Environment, Agriculture, Nature and Consumer Protection of the State of NRW. KUER supports "green startups" in North Rhine-Westphalia, founders and startups having an innovative product, process or service idea with market potential in the KUER sectors of climate, environment, energy and resource conservation. Specially accredited KUER mentors, specialists, industry experts and angel investors accompany them through all phases of their startup - from idea generation and the preparation of the business plan to company creation, market launch and financing, tailored to their specific individual needs. 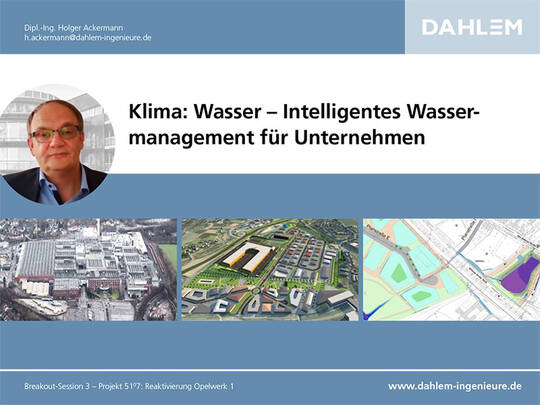 The rising number of extreme weather events increases the risk of flooding, also on company premises and in buildings. Rising costs and fees place an additional burden on companies. It is therefore worth investing in intelligent water management: How can stormwater be collected and used as process water? How can water be infiltrated instead of being discharged into the sewer system? A variety of often easy-to-implement measures prevent damage and save costs. These and other questions were discussed at an online cooperation event organized by Business Metropole Ruhr GmbH and the Emscher Association for Water Management/Lipper Association (Emschergenossenschaft/Lippeverband). Business Metropole Ruhr markets the Ruhr region as a business location and, among other things, supports companies with future-oriented, environmentally-friendly technologies. Professor Dr. Peter Höppe, former head of GEO Risks Research/Corporate Climate Centre Munich, opened the discussion round with his lecture "Too much and too little water - climate change aggravates the extremes", which was accompanied by representatives of the business community and local authorities and during which more than 100 live participants were able to ask questions to the speakers. Holger Ackermann, the responsible person  for water management from DAHLEM, was a participant in the four-person panel. In his view, climate adaptation measures are not an expression of ideology, but of foresight and common sense.

Link to the event (start of discussion from minute 30') 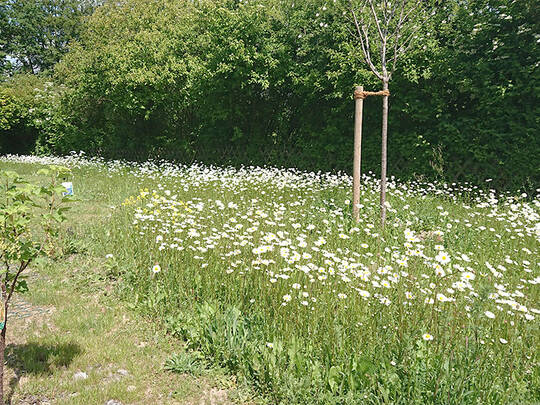 DAHLEM has won the 2nd prize at the Essen Environmental Award 2020 "Essen - hums and buzzes, Essen - is insect-friendly", with the transformation of a 200m² lawn into a flowering meadow (download folder as PDF, german). The prize was awarded for the 13th time by the City of Essen. The award is given to sustainable projects that contribute to the topics of insect-friendliness, species and biotope protection, improvement of the living environment and environmental protection. Our flowering meadow was created in a joint effort by employees and their relatives. As a species-rich flowering meadow, on which many species can be found now, it delights us with the "the buzz of life" all year round. And it also offers us a lot: relaxation, happiness, variety and joy. 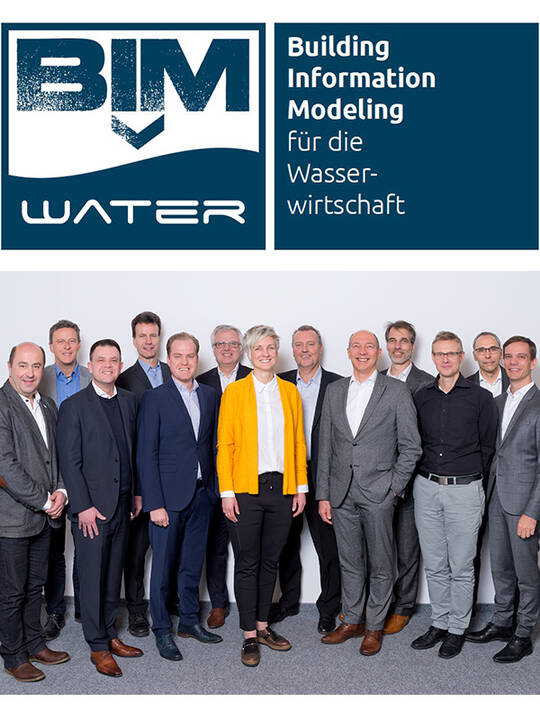 It was the second major meeting of the BIM2WATER competence initiative, which pools the experience and knowledge of 10 medium-sized planning offices on the BIM methodology for digital planning, construction and operation in water management. DAHLEM is one of the cooperation partners supporting stakeholders in the water industry with the BIM methodology in a targeted and demand-optimized way. The background of the coalition is that the general and individual requirements of the BIM methodology are not yet at a level that allows an easy start. Before corresponding activities could be undertaken and while still in the introduction phase, the possibilities and prerequisites must be competently recorded and evaluated by the respective participants. Afterwards, an individual action strategy must be elaborated. For this purpose, among other things, basic building blocks for a uniform and thus economical approach are developed for all participants. Within the scope of the BIM implementation, the client is supported in the partially necessary adaptation of these basic modules to individual needs and prerequisites.

Our Team in Berlin is growing 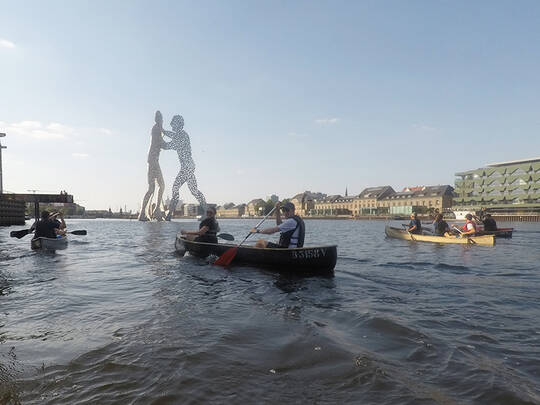 In July 2018, DAHLEM founded a new office in Berlin, initially with three employees. To date, the DAHLEM team there has more than doubled in size and further new appointments are planned. The office space is also growing. The growth in staff has been accommodated by moving within the building, from the side wing to the main building, where more space is available. With the establishment of the branch office in Berlin, DAHLEM is consistently implementing its strategy of being present in promising markets. The growing customer base speaks for itself: The high potential of the Berlin market is particularly evident in the strong demand for innovative water management solutions. 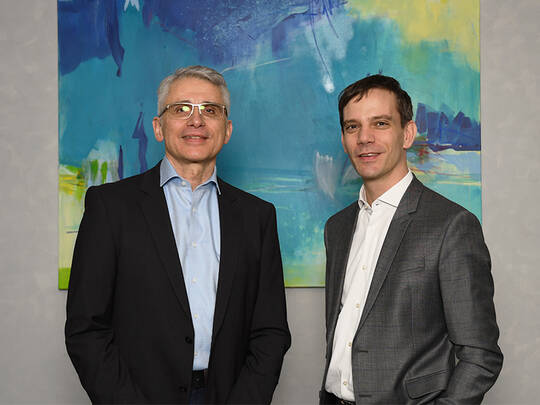 Since January 1, 2020, Dr.-Ing. Jan-Gregor Dahlem, company owner of DAHLEM Beratende Ingenieure GmbH & Co. Wasserwirtschaft KG, has become the new business owner of Dr.-Ing. F. Schmidt-Bregas Ingenieurgesellschaft mbH based in Wiesbaden. The takeover of the company took place, among other things, due to the search for a succession solution for Dipl.-Ing. Martin Schmidt-Bregas. For the time being, the engineering company will continue to operate under its familiar name and will continue to be managed by Martin Schmidt-Bregas. This will secure the company's continued existence, performance and jobs in the long term. In 2021, the company will be carefully integrated into DAHLEM's corporate culture and mission statement, a process expected to be completed by 2022. Projects that have already been carried out jointly are seen as a major plus for the upcoming integration process. Jan-Gregor Dahlem is pleased with this step: "The company is an exceptional asset for us, on both professional and human level." 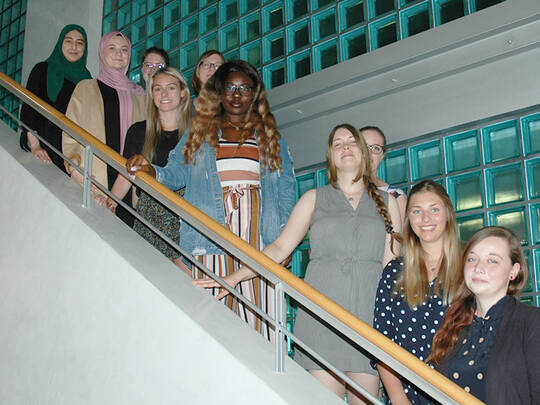 Since the start of the woman's promotion programme ChanceMINT.NRW of the University of Duisburg-Essen, female students have been visiting DAHLEM Engineering Office. The female students at the Department of Civil Engineering, Electrical Engineering and Energy Systems are preparing for a career path that is highly male influenced. This year seven female students, together with two project coordinators, got an idea of the practical daily work process here. Jana Sommer, who designs sewage engineering systems as an engineer at DAHLEM, looked after the group and talked about her professional work routine. "It brings me great joy to inspire the female students for the versatile and interesting job of an engineer at an engineering office". In October 2013, the University of Duisburg-Essen started the program ChanceMINT.NRW for female students of natural sciences and engineering disciplines. The programme offers them the opportunity to gain networking and future-oriented practical experience in numerous workshops. Corporate advisors allow female students in the first three semesters to prepare for their professional entry and future career. Gregor Dahlem is involved in the programme as a corporate advisor: "Our employees are our most important asset. In order to promote young engineers at an early stage, we are glad to get involved with ChanceMINT.NRW." 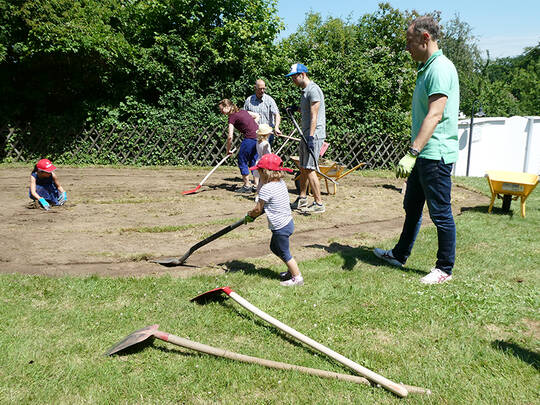 Creating a flower meadow together: under the expert guidance of a landscape gardener, Young and old prepare the area for the new flower Meadow on the garden plot of DAHLEM. The employee´families were also invited. The kids had particularly a lot of fun energetically removing the turf, raking and sowing the seeds. With a smile, Jan-Gregor Dahlem tells us that his five-year-old son remembers this experience so well that he still speaks of the flower Meadow at kindergarten. The intense commitment to nature was subsequently with a hearty snack. 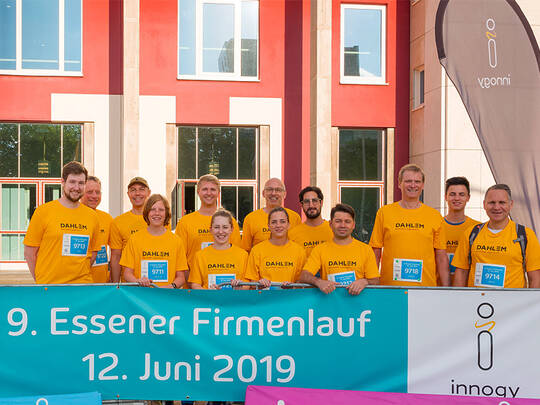 It is meanwhile the 9th Essen company run that the DAHLEM running community can register. Again it was said: Together - for each other. A highly motivated Dahlem Team, which meanwhile also consists of our employees´children, started again. "Being here and arriving is our motto." From 19:00 o'clock on, the starting line filled up with the runners at Huyssenallee. The route could be covered by running or walking. It was not the competition between the companies that took place there; everyone came together to make the most of the sporting event with great fun and dedication. The popularity of the Company run is unbroken - from year to year, more participants take part. In 2019, around 11.000 athletes ran to the finish line.

The Dimensions are different.... - Construction Site Inspections by our Trainees 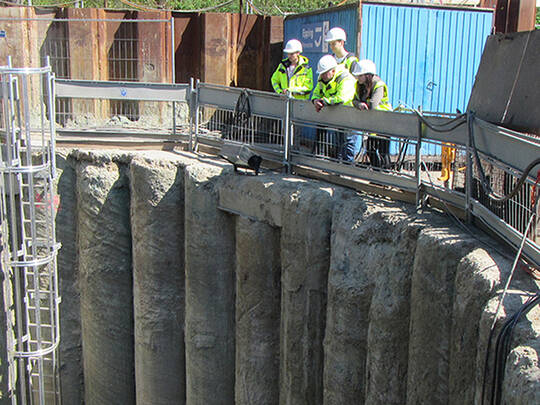 "We have already drawn similar projects, it was good to see them in real life this time. The dimensions are quite different", said Tetyana Ozeran, a construction draftswoman trainee in her second year of vocational training. Site managers Hassan Cakmak and Marc Weber, planner and site manager at DAHLEM, accompanied the three trainees on various construction sites. DAHLEM is a training organisation approved by the Chamber of Commerce and Industry for Essen, Mülheim and Oberhausen and has regularly been training young people in the field of technical drawing for more than 50 years. Our trainees are accompanied by qualified employees who can rely on many years of training experience and fulfil all prerequisites for training. Check our career page for information about training opportunities. 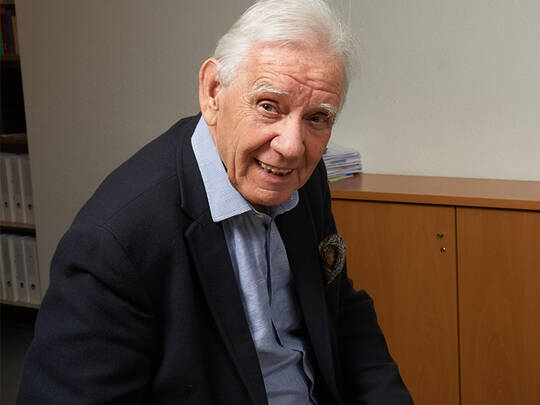 Construction Assessor Dr.-Ing. Hans-W. Dahlem is celebrating his 80th birthday in March 2019. He looks with pride on his life's work at the engineering company DAHLEM. Hans-W. Dahlem studied civil engineering at TH Karlsruhe. A subsequent internship as a Construction Assessor in the Water Management Department of the State of North Rhine-Westphalia followed his doctorate at the TU Darmstadt in 1977. In 1978, Hans-W. Dahlem joined the engineering office of his father Hans Dahlem, the company founder. Under his leadership, the company expanded with further offices - also abroad. The number of employees is growing and the areas of activity are constantly expanding. Already his father made his first contacts abroad early on, which he continued to expand. He has extensive international experience, especially in Eastern Europe, the Middle East, Africa and Asia. The life's work of Dr. Hans-W. Dahlem can also be expressed in figures: During his management, the company grew from 25 employees at a regional engineering office to an international company. Currently, more than 125 people work for DAHLEM worldwide, 80 of them at the headquarters in Essen. During his long tenure as a Managing Partner, Dr. Hans-W. Dahlem has been a member of various chambers and associations, including a board member at the Institute for Water Supply, Wastewater Disposal and Spatial Planning WAR of TU Darmstadt. In 2012, Hans-W. Dahlem gradually withdrew from business and more and more placed the company’s management in the hands of his son, Dr.-Ing. Jan-Gregor Dahlem. 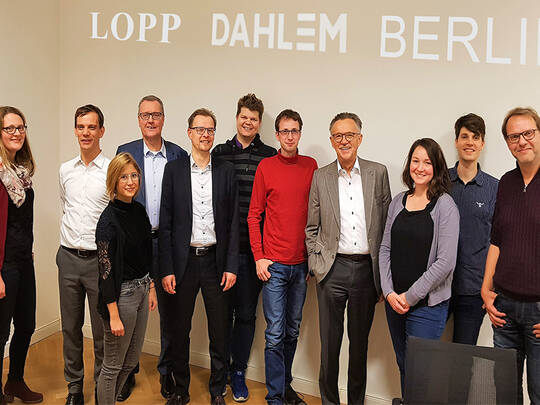 DAHLEM established a new branch office in Berlin in June 2018. Thus DAHLEM is also present in the German capital Berlin, in addition to the other German locations Darmstadt, Würzburg and Stuttgart. Dipl.-Ing. Robert Lohrsträter (right) leads the branch office. He is supported by two other employees - Sandra Weidlich, M.Sc. Water Management (right), and Susanne Busche, M.Sc., Technical Environmental Protection (left), in addition to the company owner Dr.-Ing. Jan-Gregor Dahlem (left). Both employees made Berlin their adopted hometown many years ago.